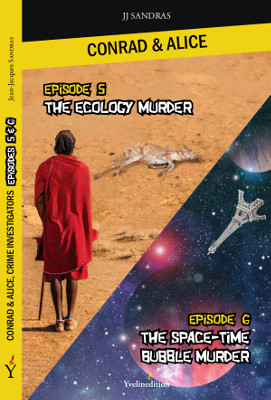 Here are the fifth and sixth episodes concerning criminal investigations in Paris by Alice, a twenty-six year old French psychologist, and Conrad, a South African pensioner in his late sixties.
- In the fifth episode, Alice introduces Conrad to Frances from London whom she met in an English speaking group in Paris. Frances knows Patrick, an exColonial living in France like Conrad, and the four of them end up having lunch together. The supposedly friendly Commonwealth meeting goes sour when Patrick speaks of his wife’s recent death in Zimbabwe. Patrick is financially embarrassed by the fact that the life insurance company hesitates to pay him because they want to be sure he didn’t organise his wife’s murder. Once again, our two investigators find themselves involved in a murder riddle and end up by helping the police solve the case.

- In the sixth episode, Alice invites Conrad to meet one of her patients, Vincent, whose wife was electrocuted in her bath with her hair dryer. Although the police only have doubts about him concerning her death, Vincent, who is emotionally fragile, appeals to Alice for psychological help. Sophie, who is Vincent’s girlfriend, helps Conrad and Alice to solve the circumstances of the dubious suicide. Once again, our two investigators find themselves involved in a murder riddle and end up by helping the police solve the case.